Meg Berry is set to release her new single “Built to Lose” as the follow up to her breakout radio hits “Colored Balloons” which has spent weeks at #1 on Top 40 (NRH) garnering close to 8500 spins per week across Top 40, Country and AC/Hot and “Happy Holiday Song” which debuted at #3 on the Holiday (NMW) charts in 2020.

“I wrote “Built to Lose” for a friend who lived this song.  I hoped that by giving my friend, who was smarting from their painful return to dating after already feeling abandoned by the tragic end of a long-term relationship, a rhythm and melody for their nightmare date that my friend might find a way to sway and move their way out of the pain of it all, maybe even laugh at it and give dating again another whirl.  I’ve heard from quite a number of folks who can identify with this song and find it scratches that itch of feeling charmed only to find the charmer has invited them into something that is Built to Lose.  With so many of us feeling abandoned and duped by false-promises and dashed-hopes these days, I wanted to share this song with radio listeners everywhere in the hopes that it might move them out of whatever funk they may be struggling to swim out of too.”  says Berry

Marc Urselli says, “It is a pleasure working with Meg Berry!” 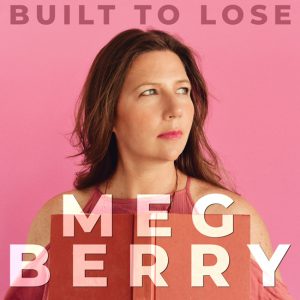 About Meg Berry:
Singer-songwriter, producer Meg Berry has been praised everywhere from Billboard Magazine to Refinery 29.  Her song “Colored Balloons” is currently #1 on Top 40 radio (NRH) floating up 9 top 100 charts with 7 in the Top 10 across Top 40, AC and Country, including on iHeart Top 40 radio.  Live, she made her solo artist debut at the CBGB’s Music and Film Festival in NYC in October 2014, headlining the reopening of the infamous Bar 13 in Union Square to a packed house.  Meg’s “Happy Holiday Song” debuted in November 2020 at #3 on the Holiday radio charts and essentially stayed there for 6 weeks.  Meg lives and records for her record label Farm to Table Sounds in a big old barn in South Orange, NJ with her family.  Meg has written an alt country body of work in her signature Gotham Country style that tells the very personal story of the man who goes to war and brings the war home.  For more info go to MegBerry.com

Tommy Rice “You are My Life, My Lover, Forever” Featuring Patricia Barrett Lands At Radio

Promising songwriter, Tommy Rice, is proud to announce the release of his new single: You Are My Life, My Lover, Forever.  This song describes the strong love that he and his wife shared together.

“She was my whole life, a love that will last forever.  Her feelings matched mine, making it a love of a lifetime.” – Tommy Rice

When Rice’s beloved wife died of brain cancer, he felt like something triggered his mind to start writing songs of love.  The lyrics started to come to him in his sleep, at work, and driving to and from work – so he began to write them down.  The lyrics in this song are so touching – many listeners will be fighting back tears as they feel real love in every word.  ” You Are My Life, My Lover, Forever” is the follow up single to, “The Greatest Love of Them All”, “Eternal Promise of Love”, and “Miss Her More Today Than Yesterday” which have been embraced to listeners worldwide.

2021 NMA Crossover Artist of the Year nominee for is almost unbelievable for the songwriter, solidifying Rice’s new venture within the music community.  Complimenting the new release of “You Are My Life, My Lover, Forever”, Rice has announced the debut of the new music video and lyric video. Rice also has a book titled, Miss Her More Today Than Yesterday, named after his first song.  With a large catalog consisting of over 123 songs and no plans of stopping anytime soon, many of his songs feature Patricia Barrett, a wonderfully talented singer from Nashville, TN.

About Tommy rice
Tommy discovered his passion as a songwriter and author after losing his wife, Deborah, to an aggressive form of brain cancer.  Throughout her battle, they kept God at the forefront, as they always did together.  3 years later, God called her home.   He joined a grief recovery class where he was asked to write a short story of their fight with cancer. His short story became his first song. He compliments his music and his knowledge by writing a book about the struggles of love and life all while all while continuing his path to mend a broken heart. With accolades as a 2021 NMA nominee for Crossover Artist of the Year, his first album will be released Summer 2021.

Recording Artist Meg Berry is celebrating success with current single “Colored Balloons” as single reaches the Top40 and AC/HotAC charts, as well as, jumping into the Hot100 this month. Momentum for the song is gathering, giving fans a first listen to the infectious single.

“Wow” says Berry about her follow up success to her break out holiday single “Happy Holiday Song” which debuted at #3 on the Holiday Charts in 2020.  “I really don’t know what to say except thank you to all the listeners and fans requesting ‘Colored Balloons’ and thank you to all of the radio programmers who are playing it.”

Berry wrote this song as she found a moment of deep peace from going through a very tough time. While absent-mindedly watching balloons sway towards the ground after a party and watching the balloons make a gentle fall from their heights allowed her to feel the peacefulness coming down and in those moments of watching the balloons, she realized the relief from the burden of the stress she was carrying.  Wanting to share that moment of peace, she wrote ‘Colored Balloons’ to share and capture it forever.

“With all the stress in the world, I was honored to be able to share “Colored Balloons” with radio in the hopes it would give listeners everywhere an easier more peaceful day.”

Meg has been praised everywhere from Billboard Magazine to Refinery 29.  She made her debut as a solo artist headlining the reopening of NYC’s beloved Bar 13 for the final CBGB’s Musicfest. Meg Berry’s “Colored Balloons” can be found in the Top 10 of 3 Top 100’s- the Hot 100, Top 40 and AC, currently. It is the follow up to her Holiday hit “Happy Holiday Song” which debuted at #3 on the Holiday charts and stayed there for the 2020 holiday season.  For more info go to MegBerry.com