Jamie Alimorad’s “Give A Little Lovin’” Music Video Out Now

Award-winning singer/songwriter Jamie Alimorad has released the music video to his latest single, “Give A Little Lovin’”, today.  Just in time for Valentine’s Day, this colorful and lively video captures Alimorad, and co-star Birdie Harris, in a series of comedic vignettes about falling in love. His success has not been limited to radio, as across all streaming platforms, “Give A Little Lovin’” has already surpassed 4 million streams. Written with, and produced by, GRAMMY-nominee Ross Vannelli, “Give A Little Lovin’” is the first in a string of singles to be released by Alimorad throughout 2022. Alimorad co-directed the video alongside filmmaker Trenton Oliver.

“When you start developing feelings for someone, you try and act all cool, and suave,” says Alimorad. “Sometimes it works, other times you wind up with egg on your face. I wanted to have fun with this video because the song itself is so lively, and after a series of ideas, I decided to go with the outrageous. Everything from grocery shopping to grilling money.” Alimorad says 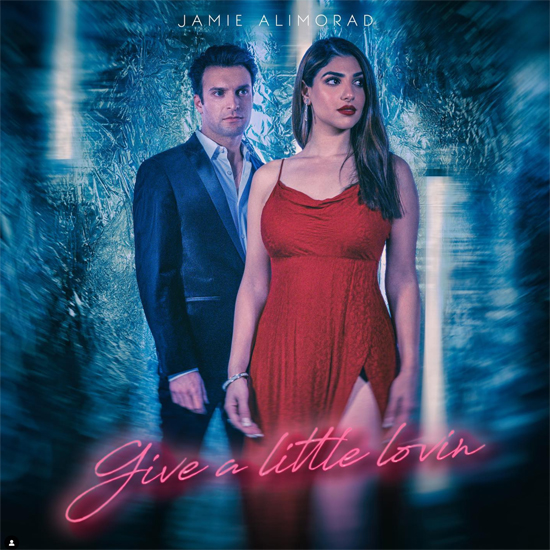 About Jamie Alimorad:
Light first dawned on Jamie Alimorad’s prodigal artistry in Boston’s underground music circuit, while attending Northeastern University. From those humble beginnings, Alimorad dedicated himself to honing his craft as a singer/songwriter and multi-instrumentalist. His time at Northeastern proved invaluable, culminating in a Bachelor of Science in Music Technology, and a blossoming career.Upon graduating, his music began trickling out from Boston’s indie scene and out into the world at large. He independently released two albums (Cornerstone and Words Left Unsaid) that garnered enough success to warrant his first nationwide tour, taking him through cities, including, New York, Las Vegas, and Los Angeles. The tour’s success led to the 2014 music video for Words Left Unsaid single “Beautiful” hitting over 2 million views on YouTube.Alimorad’s breakthrough album, This Is Tomorrow Calling, saw the singer team up with GRAMMY-nominated singer-songwriter and producer Gino Vannelli, and GRAMMY-nominated songwriter and producer Ross Vannelli. The trio have crafted a collection of vocal-centric pop music, that has more than its fair share of innovative twists, and turns, fueled by Alimorad’s effusive passion towards fusing genres, including two New Music Weekly Top 10 singles, “Not Ready To Say Goodbye” and “Brighter Days,” while also receiving GRAMMY consideration.